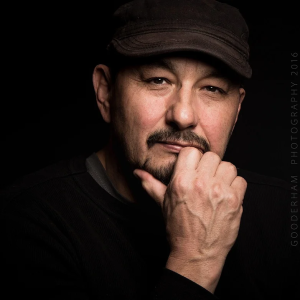 DAVID LARONDE, a fiercely proud Canadian, is a contemporary Indigenous singer-songwriter performing his own soothing brand of folk and edgy rock and blues. He hails from the land of the Teme-Augama Anishnabai (Deep Water People) in beautiful Northern Ontario. With the David Laronde Band, duo or solo, he delivers an energetic and soulful performance to be remembered.

His Debut CD, “Right City Wrong Town” was nominated Best Blues CD by Aboriginal People’s Choice Music Awards 2013. David’s storytelling is a fresh take on heartbreak, loneliness, love, hope and joy with a cool summer breeze in the background. His music transcends an urban influence and the mystical magic of his homeland and its ancient people. In the songwriting is an ever-present backdrop of natural forces of nature…wind, water and waves.  Music and natural forces are unstoppable, said David.  Music transcends all.

Direction home and a re-rooting of personal beliefs inspired the writing of “Under the Raven’s Wing” in 2015. This homecoming took shape as a healing and deeply personal writing and recording project defining David as a gifted contemporary indigenous songwriter and singer. His music makes the transition from folk to rock to blues seamlessly as the songs “get personal” one minute with Can’t Take You With Me or Brothers and Sisters and then “exploding into universal themes” like Northwind Track and Whispering Wind painting the scenery for the journey home. This “healing” music tends to navigate universal mysteries and personal journeys and roll them into a single song that just has to be shared with you.

In 2021 David’s songwriting got rolling again with a third album entitled “I Know I Can Fly” that received a Canadian Folk Music nomination for Indigenous Songwriter of the Year. He was inspired by a desperate need to respond to escalating numbers of teen suicides, single mothers and unjust incarceration statistics in Canada. These are modern paradoxes affecting Indigenous people across the country and we need to act to do something David says. One Last Time, Right Here For You and Leonard ‘s Lament tell these stories in truthful, eye-opening accounts. A personal need for spiritual freedom is evident as David’s journeyman song writing matures to untested places in, I Know I Can Fly, Footsteps and Run With My Father. Freedom is a personal mind-set claims David and requires an accompanying soundtrack. The recorded songs feature a vocal maturity and a very interesting musical sensibility. To counter the serious side of the album a few toe-tappers like Gonna Be Alright (David’s Covid song) and Where Are You This Christmas were deliberately injected. Lastly the time transcending ancestral gem I Need You takes us back through time to our forerunners in an upbeat and nature driven tribute song.

With a full band, duo or solo he delivers an entertaining, energetic and soulful performance. With three full length albums out David’s storytelling is a fresh take on heartbreak, loneliness, love, hope and joy with a cool summer breeze in the background. His music is uplifting and refreshing as he transcends an urban influence and the mystery of ancestral magic of his homeland.

The message in his music is simple, says David.  In this great land of ours let’s use the strength and power from our ancestors who thrived for thousands of years holistically, physically and spiritually connected to Mother Earth.  We all have the power to live free and healthy just by being aware of our connection to our ancestors.

For David, creating music has healing and transcending power that can travel through time and then land in the present with a message. Connecting to ancestral places across time and space grounds Laronde’s music in both physical and spiritual realms. Touchstones to ancestral ways continue to be a driving force in his songwriting.