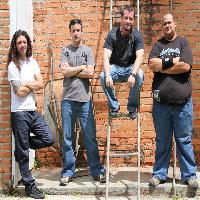 La Fe – One of Venezuela`s hard rock cult bands from the 90’s, and best known for their artistry and mastering of their instruments, proudly release the 10 Year Anniversary Edition of “Nueve Cinco” (originally released in April 2007). For the first time, fans of La Fe will have the chance to listen to live recordings of their hits “Nueve Cinco”, “Adicto a Ti” and breakout smash, “Entre Tus Piernas” which brought new recognition and a strong following to La Fe.

The main elements of La Fe is complete with meaningful lyrics, stunning visual artwork from Irán Caro, and masterful production as heard on their 1996 self-titled EP, 2007 studio album debut Nueve Cinco, and 2011 sophomore album Diario de Transición. The original physical release of Nueve Cinco is considered a must-have for collectors, those lucky enough to get their hands on any of these CDs (some copies signed by the band members) will be rewarded with a fantastic musical experience and a unique artistic product that will last a lifetime. Important to note, the 10 Year Anniversary Edition of Nueve Cinco that includes the live recordings is only available for streaming and digital download.

La Fe’s original Nueve Cinco CD version is available for your enjoyment at CD Baby and at selected on-site and online record stores worldwide. You can also purchase their music releases online through digital download and streaming platforms to take with you wherever you go.