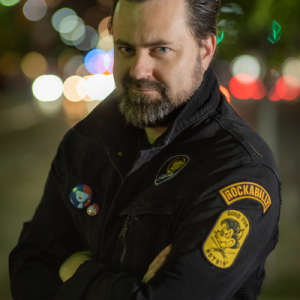 Paul has had an ear for staying melodies from an early age, developing a love for blues and rockabilly music when he was about four years old after hearing the greats like Elvis Presley, John Lee Hooker, B. B. King, The Beatles, and Roy Orbison on illegal bootleg tapes and records in the USSR.

Paul’s parents enrolled him in the specialist music school in St. Petersburg (then Leningrad) at the age of six, where he studied accordion, piano, music theory, and vocals, and played in a pop orchestra.

Staying true to his affection for Western music, Cafcae picked up the guitar while attending high school in Maryland, USA. It was around this time that he began experimenting with writing his own material and went on to play in bands in Europe and North America. Upon becoming “Canadian by choice” in 2009 Paul continued to make his way to earning a spot on the rock ‘n’ roll musician marquee by releasing new music, touring, and performing at festivals.

The prolific songwriter, Paul Cafcae has a few more singles coming out during the summer and is gearing up for another LP in the fall of 2021.

WHAT THE WORLD HAS TO SAY

“If it were 1962 again, this record would have been number 1 on every chart.”
Joe Kidd, Clouzine Contemporary Music Magazine

“Paul Cafcae has just released his single Downtown. Why should you care? Well, it was mixed and mastered by Glen Robinson, who has worked on records for artists from The Ramones and The Beach Boys to Nashville Pussy, Voivod, and even U2. Plus it has an extraordinarily sizzling harmonica solo by Hector Alexander.
Tinnitist

“An artist in love with the classic 50’s and 60’s musical style. He gives it a modern twist whilst also capturing the authentic vibe of the rockabilly and do-wop genres, amongst others. As well as a gifted vocalist and a first-rate guitarist, his songwriting reflects the ups and downs of being human in a charismatic and entertaining fashion.”
The Faulkner Reviews